Housing is a barrier to re-entry. So are job skills and emotional support. A religious-based group provides a fresh start. The fourth in a series of multimedia projects that examine causes for recidivism in the American justice system. 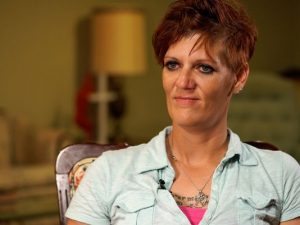 Courtney Pollard has been incarcerated four times in the past two decades.

OKLAHOMA CITY — Courtney Pollard is in church on a hot Thursday night in July. She’s comfortable in jeans and a short-sleeve shirt. Her short, red hair frames a small face. She’s up front, singing with the band.

The 38-year-old mother of five was released from prison a few weeks earlier after serving seven years for grand larceny, escape and drug possession charges.

Attending services at Redemption Church is required for residents of Exodus House, an apartment complex that sits 20 minutes down the road. Run by the Oklahoma Conference of the United Methodist Church, the complex houses former inmates and provides what the prison system doesn’t — a place for people like Pollard to start the road to reform.

On stage behind the singer, a drummer pounds out a slow beat.

In the pews, ex-inmates and their loved ones clap, sway and raise their hands in praise. Pollard’s voice flows past stained glass windows and into the church’s hallway.

As the music crescendos, congregants stand to sing.

The shame that can come with a criminal record, nowhere in sight.

An escape that changed her life

Church and redemption are a far cry from where Pollard, who once jumped a fence and ran from jail to avoid being sent to the state’s Mabel Bassett Correctional Center, would seem to belong.

She sat back in a plush chair in a rear church conference room and talked about fleeing.

She and another female inmate had swallowed meth to avoid getting a third woman in trouble, Pollard said. High, they ran out of the jail’s back door, climbed the fence and kept running. After a series of hotel rooms and car rides, they landed in San Diego.

Pollard spent several days driving to the beach, going to parties, drinking. She had been incarcerated for years and needed a break, she said, before going back to Mabel Bassett. The plan had always been to turn herself in.

Pollard has been in the detention system four times in two decades. At 18, she served five years for forging checks. She went back two years later for failing a drug test while on probation.

As darkness falls over Oklahoma City, Pollard leaves Redemption Church for the drive back to her apartment.

She returned a third time for failing to report while on probation. Approaching 40 and calling her kids from a prison phone yet again made her rethink her choices. This most recent incarceration, she said, will be her last time.

“I’m 38, and I’m a grandma,” Pollard said after church services ended. “I wasted my entire life on nothing.” 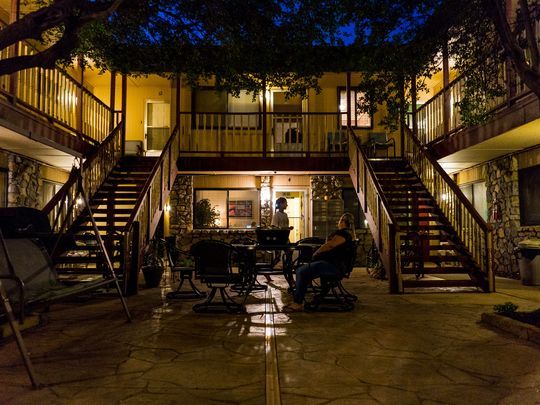 Exodus house okc… The courtyard as night falls over Exodus House, a religious-based organization in Oklahoma City that provides housing and rehabilitation programs for former inmates re-entering society. (Photo: Jarrad Henderson, USA TODAY)
A few miles down the road, she pulls onto the complex’s quiet street. Neighbors greet her as she walks into the open courtyard, which is surrounded by two stories of garden-style apartments. Pollard arrives just in time for a birthday celebration — one of many activities that take place on that courtyard patio.

Laughter rises to the second floor, where Melissa Shiver, 51, lives. In her apartment she prepares for work — the night shift at a state-run crisis center.

That courtyard, Shiver said, has been pivotal for her recovery. A struggling addict, she spent eight years in Mabel Bassett for manufacturing meth. Sitting with neighbors is where she learned to share her story. She realized that it’s OK to give a piece of herself to strangers.

Residents focus on recovery, not money. When we met her in July, Shiver had been out of prison for nine months. She left Mabel Bassett Correctional Center with only $189 — earned after years of working prison maintenance.

Each apartment is sponsored, and inmates pay no rent or utilities aside from electricity.

Exodus House requires residents find work within a month of arriving, and Shiver had found work at Coca Cola bottling company. But the hours would have conflicted with the house’s curfew.

The rules are strict. Violations meant she could have been kicked out. She turned down the job. It was a hard decision. But she knew that sticking with the program could save her life. That was the kind of long-term thinking that many inmates either didn’t do or had to relearn.

The key to a program like this, explained Kristen Harlin, executive director of criminal justice and mercy ministries for the Oklahoma Conference of the United Methodist Church, is “offering skills and lifestyle changes through education.” It comes down to “teaching them how to think healthy.”

Shiver’s apartment is filled with positive affirmations. On the beige walls are quotes: “Life’s a journey.” “With God all things are possible.”

Above her sofa is a framed picture of a former girlfriend who died in a car crash in March, just three weeks after leaving Exodus House. Shiver still struggles to get over the loss and was tempted to return to drinking. Exodus House counseling has helped keep her sober.

Shiver walks out her front door to catch an Uber to work. The complex is quiet, still. The birthday celebration has ended.

A right and wrong way to re-enter society

From 2008 to 2015, nearly 200 residents came through the Oklahoma City program. Of those participants, 13% were re-incarcerated. The national re-incarceration rate is 25% within about two-and-a-half years. About the same percentage of women nationwide return to the system within six months.

The rules around re-entry to society from prison are often oppressive. Exodus House helps former inmates break through that barrier.

In addition to housing and counseling, the program helps former female inmates accomplish things that most people take for granted, such as getting a driver’s license or ID.

“There’s no real opportunity for people to rebuild their lives,” said Andrea James, founder and executive director of the National Council for Incarcerated and Formerly Incarcerated Women and Girls. We need to ask “those people that are formerly incarcerated: What is it that you need in your life?”

In Oklahoma, prisoners are supposed to fill out questionnaires six months before they leave prison to prepare for re-entry. But there’s little follow-up to ensure that inmates get services they need. And for those who live in rural areas, access to rehab services and other programs is limited.

The system, James said, doesn’t focus enough on mental health and other needs. Instead, it focuses on criminality.

That was the same system that told Pollard she wasn’t rehabilitatable. Her drug use and criminal history led some to say that nothing would work to turn her around.

She has come a long way since then.

Pollard left the Exodus House program in August. She’s earning an associate’s degree in psychology while working as a customer service representative at a knife company.

Back in that church conference room, after the Thursday service, she summed up what kept pushing her back to the system.

So much of what Mabel Bassett prison offered — incentive programs that actually kept inmates from seeing their kids, job training that put women in fields like construction where getting hired was difficult — was misplaced, she said.

“I don’t think that the people are the problem with recidivism,” Pollard said. The problem is the system.