Breaking out in the Spirit

1/25/2013
The Conference Strategic Plan underscores the importance of both individual leadership and ministry partnerships to be fruitful for Christ in Oklahoma. Methodism’s founder, John Wesley, emphasized both personal and social holiness — words that have evolved into mercy and justice ministries. Here are modern-day stories of such individual and corporate faith witness.

Stan Basler heard the yelling as he walked through the state’s maximum-security men’s prison at McAlester. 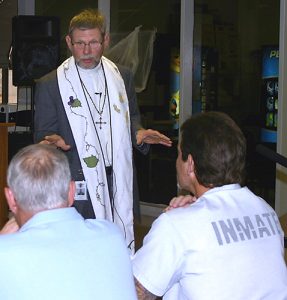 Stan Basler talks with a CJAMM volunteer and a man incarcerated at the state correctional facility near Lexington. Photo by Amelia Ballew

“The wicked shall overcome the righteous!” men shouted.

He was there to lead the first Kairos weekend inside an Oklahoma Department of Corrections facility. The year was 1994, and Rev. Basler was new director of Criminal Justice & Mercy Ministries (CJAMM) of the Oklahoma Conference.

Almost 19 years later, the scene remains vivid to him.

“We walked in that rainy October afternoon, and people we couldn’t see shouted. We were up on the top floor, in the old F cellhouse that looked like something out of a James Cagney movie,” the clergyman recalled. “We had a rough bunch in there, people considered by the authorities as troublemakers. And it was multi-ethnic, and they didn’t appreciate one another.”

He was not afraid. “That’s just where I was supposed to be, I think. I’m afraid of airplanes, not prisons. Kairos is designed for what I call the lost sheep.”

He paused and cleared his throat. “It was one of the most powerful experiences in my entire life.”

Kairos concluded on a Sunday, “and when we walked in, we could hear lots of people shouting, ‘Good morning, Kairos! Who’s the church? We’re the church!’” Basler marveled. “At the end, men who were so hardened were crying and hugging each other.”

Other firsts followed as Basler worked to expand CJAMM’s outreach in direct ministries. Redemption Church in Oklahoma City launched later that year, and the first New Day Camp, for children of incarcerated parents, was held in Summer 1995.

This year, on Feb. 1, Basler departs his post as CJAMM director. Adam Leathers will take on that appointment. Basler will officially retire from the Oklahoma Conference.

But he will continue to work in the field of restorative justice. For Saint Paul School of Theology at Oklahoma City University, Basler will become the Visiting Professor of Restorative Justice and Prison Ministries.

For Basler, the new role brings opportunity for him to more fully engage in prophetic ministry related to systems. Already an adjunct professor for Saint Paul School, this Distinguished Alumnus will be teaching more, collaborating more with public officials and other academicians, advocating for societal and system changes just like the prophets called upon Israel.

“Our Discipline is not fully appreciated when it talks about social holiness as well as personal holiness,” Basler said. “That was always part of my self-identity about ministry.”

Elaine Robinson, dean of Saint Paul at OCU, affirmed Basler engages systems as well as individuals through his Christian calling.

During a prison ministry immersion class he leads, “the most intense part is in McAlester. Students go with Stan to visit prisoners on death row,” she described.

“Stan gets down on the floor, so he can look through the tiny opening at the prisoner. And there he says to each of these men, ‘How is it with your soul?’ Stan is very Wesleyan, because he understands not only that he must work to change the systems that dehumanize, but also that each individual is a precious creation of God, no matter life choices and mistakes, and he extends that grace.”

Dr. Robinson said Basler’s passion for restorative justice ministry enhances the seminary’s mission. “Preparing pastors who have a deep understanding of restorative justice, as well as some who will choose to work within the prison system as chaplains or whatever capacity, is part and parcel of our mission,” she stated.

Rev. Leathers recalled watching his CJAMM predecessor minister one day to both a state leader and an inmate in withdrawal. Basler is “very authentic,” Leathers said. “There’s no pretension about him. I want to honor the ministries he started.”

Outgoing Director Basler rejected any worry about the future for CJAMM. “We’ve got lots of fine people to do this,” he said.

Basler said, “The watershed difference is that this Conference has historically made Apportionment money available for this kind of ministry.”

The CJAMM model is nationally admired, but “other conferences don’t get the support for this.”

In 1994, the bulk of CJAMM’s $95,000 budget was provided for through the Apportionment, he recalled. Today that portion for CJAMM totals $377,000, and the ministry’s budget is more than $650,000. Grants and other donations, large and small, also help meet the needs.

That foundational Apportionment giving was in place long before Basler and his predecessor, William Henry Bentley.

Now retired, former Oklahoma Area Bishop Dan Solomon knows about the ministry’s roots. “What’s remarkable to me is, way before even a very few people were talking about prison ministry, an annual conference appointed a full-time person to go into the prisons of Oklahoma, to meet with inmates, both women and men, lead Bible study groups and self-esteem groups,” he commented recently.

‘Hopefully we can develop some kind of collective vision for restorative justice here in Oklahoma.’—Stan Basler

“That was, I think, unique across Methodism when it began.”

As Oklahoma’s episcopal leader in 1994, “I had the opportunity, along with the Cabinet, to reflect on the importance of this ministry in our Conference,” Bishop Solomon remembered. Rev. Bentley already had accomplished “strong and good work with prisoners directly, in facilities.”

‘Hopefully we can develop some kind of collective vision for restorative justice here in Oklahoma.’—Stan Basler

Solomon continued, “Prison ministry was in our DNA, but it was still locked up. It became apparent, if we were going to address justice issues, we had to expand the umbrella of our concern to the families and particularly the children.”

Basler’s first career was as a lawyer. He was just beginning his clergy career in 1994, as an associate pastor at Muskogee-First, when he was appointed to CJAMM.

He welcomed the appointment. Basler had asked God for guidance to continue in justice ministry in some way when he accepted God’s calling and left his legal career.

“Stan brought a passion for working with incarcerated persons along with their families, and the sense of wanting the Church to be a presence in the life of that segment of our society,” Solomon said.

“Stan helped us look at what we were doing in a more holistic way. We took the work that had been done effectively and were able to build upon it, see it flourish in new ways.”

He concluded, “I hold high hope for this next chapter in Stan’s ministry. He’s going to be investing time and energy toward the root causes” of justice issues.

Bishop Solomon joined Basler at the launch of the first Redemption Church, during Advent 1994, in Oklahoma City.

Basler remembered a sudden uneasiness as he painted his office on his very first day as director. How could he find people interested in this type of ministry? Doubt “crept into my mind,” he admitted. “You could say that was the voice of the enemy!”

Christ helps us overcome the enemy. An ice storm shut down much of Oklahoma City on the weekend of Basler’s 62nd birthday. Most churches cancelled Sunday worship, but Penn Avenue Redemption Church opened its doors. Of 52 worshippers present, 30 were former inmates. “That was a tremendous birthday present,” Basler remarked.

On Feb. 16, a retirement luncheon will honor Stan Basler. For more information, contact Lesa Rhoads in the CJAMM office, 405-530-2014.